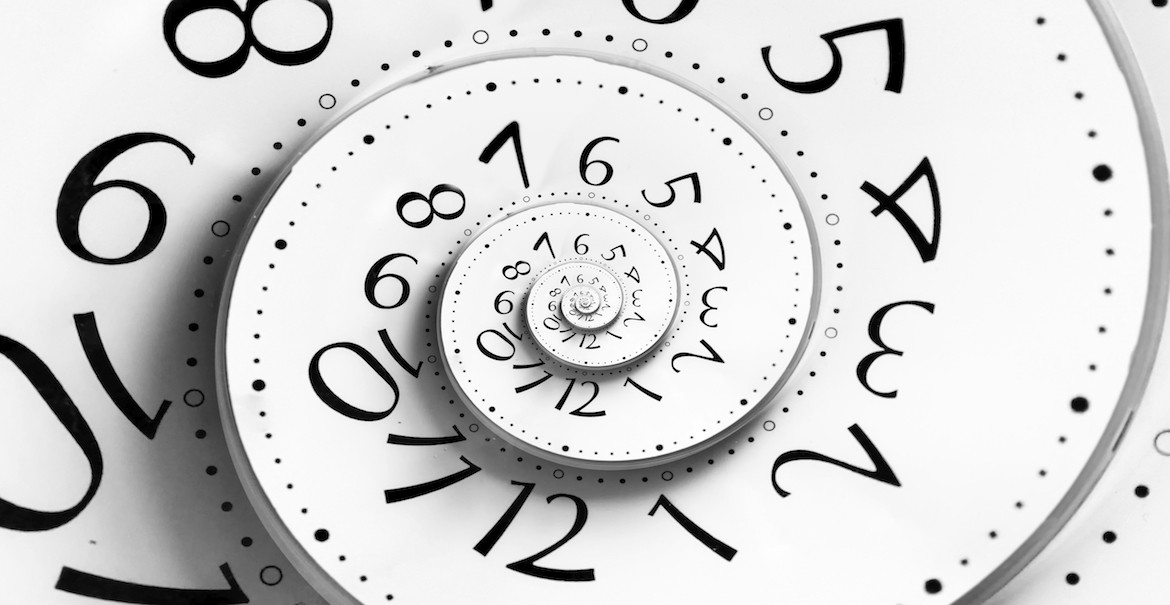 Time is one of the one of the most difficult subjects to ever puzzle humankind. We’ve been searching for ages but finding a true definition of time continues to escape us even to this day. Most civilizations from the past believed, time was renewable and infinite, since everything in nature showed a kind of resurrection and recapitulation, the circle of seasons, falling nights and rising days, the ocean tides and moon cycles.

At that time mythology explained it all: the Greeks had Kronos, regarded as destructive and all-devouring (this sounds like very contemporary), the Egyptians Ra, the sun, and Khonsu, the moon, running around earth marking the passage of time. Mythology essentially was a way to describe events of the past and explain natural phenomena. The greatest efforts to understand and define Time began with the philosophers of ancient Greece, who believed that the universe had an infinite past and no beginning.

During the Middle Ages, with the spread of Christianity, evolved the concept of the universe having a finite past and a precise beginning. St. Augustine, one of the major influencer of Western culture, in the fourth century, treated the matter in a very different way, he suggested that maybe time is an illusionary product of our mind an impression. Was St. Augustine right? So time is an illusion of the human mind?

"The minute that you're not learning I believe you are dead." - Jack Nicholson

Time has always be such an important aspect in our lives that people have difficulty to understand the possibility of ancient cultures viewing time in a different way than we do today. We certainly feel ourselves being pushed and pulled along by the river of time. In this way time is said to pass, with a distinct present moment "moving" forward into the future and leaving the past behind. Conventionally, time is divided into three as past, present, and future". The past is generally seen as being definite an immutable, and the future as undefined and blurred. As time passes, as entity that flows and move through, the moment that was once the present becomes part of the past; and part of the future, in turn, becomes the new present.

For the capitalistic concept of time, time is truly money. In a profit-oriented society, time is scarce, it flows fast and if you want to benefit from its passing, you have to move quickly. In the western world, we even talk about wasting, spending, budgeting and saving time. This seems logical enough, but can missed opportunities be quantified in monetary terms? Efficient time scheduling and monetization is a common practice in the U.S. and northern Europe with their Protestant work ethic, the harder you work, the more money you will make. This idea, however, is less true in Southern European countries, where authority, privilege and birthright might play an important role on your time value. For cultures like the Arab and Latin spheres, time is a subjective factor, which can be stretched, or dispensed with, no matter what the clock says.

"I've been reckless, but I'm not a rebel without a cause" - Angelina Jolie

In some Eastern cultures, however, the adaptation of humans to time is viewed neither as linear but as cyclic. Believe us, cyclical time is not a scarce commodity. There seems always to be an unlimited supply of it and, as they say in the East, when God made time, He made plenty of it. Asians do not see time as racing away unutilized in a linear future, but coming around again in a circle, where the opportunities and risks will re- appear.

The Amazonic tribe Pirahã, have no concept of time beyond the present and, for them, future doesn’t exist. They have no reference to ancestors or heroes of the past, no past tense or a word expressing the concept of future in their vocabulary, as everything exists only in the “here and now” The Pirahã have no desire to remember where they come from and this is why they tell no stories. Therefore, although it may be difficult for many people in time-dependent cultures to understand the Pirahã tribe philosophy, we can still learn an important lesson: to live every moment to the fullest.

Nowadays we feel like we can be or achieve anything, but not save or gain time for the future. The more we realize it is scarce and precious resource the more we crave for it and its value rises. Could it be that time is the ultimate form of luxury? Uncatchable, unstoppable you cannot contain it but just live its powerful force. Free and primordial pure and genuine, that cannot be cheated for we are all the same. Should it be used in a wiser way not to be forever lost? Avoid spending time doing something we do not love, or carrying on with no scope? We should breathe its true and crystalline nature and enjoy our accessible treasure. The whole concept of luxury is changing from having to being as we cannot reach happiness or buy time, but we can still search for it. To people who have everything Time is the ultimate luxury. Increasingly, the more people we ask about their idea of luxury, the more they come back with: ‘Luxury is time, time for yourself, time to spend with your loved ones, time to do what you want, a moment to get lost’.

Time is luxury for ourselves to devote to those moments that make us feel alive, living life at the fullest, seizing the day, savor every emotions.

“Today we live in a world where everything runs fast, we are caught up in a spiral, sinking down into this vortex of things we ought to do, to pursue. We eventually realize we are following the rules blinding and missing all the beautiful instants, life seems to slip away as we remain trapped living to make rather be. That’s why we seek out unique, personal items with their own story and soul, which fits you like your favorite thing. This is my way to see things in my work and my life”